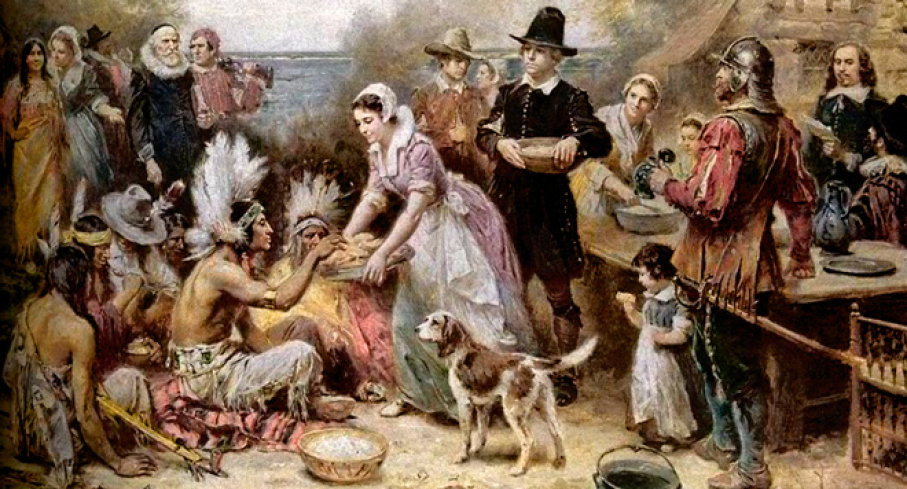 To understand true thanksgiving, we must begin with Christ’s example.  He gave up everything.  He was homeless and trusted His Father in heaven for His daily bread.  He could have summoned the elements to come together to create any comfort and convenience He wanted or needed.  Instead, His every waking hour was focused in ministry to others, demonstrating the love of God the Father.  Everything He said and did was meant to teach us a lesson for us to follow toward the “abundant life” He spoke of.  If you have nothing or in your estimation, not enough, don’t compare what you have to what others have.  If your faith is right, then you have everything you need. Trust God.

Melody Beattie writes: Gratitude unlocks the fullness of life.  It turns what we have into enough, and more.  It turns denial into acceptance, chaos to order, confusion to clarity.  It can turn a meal into a feast, a house into a home, a stranger into a friend.  Gratitude makes sense of our past, brings peace for today, and creates a vision for tomorrow.”

“Do not be anxious about anything, but in every situation, through prayer and petition, with thanksgiving, present your requests to God.  And the peace of God which transcends all understanding will guard your heart and minds in Christ Jesus.” Phil 4:6-7

“A rich landowner named Carl often rode around his vast estate so he could congratulate himself on his great wealth. One day while riding around his estate on his favorite horse, he saw Hans, an old tenant farmer. Hans was sitting under a tree when Carl rode by. Hans said, ‘I was just thanking God for my food.’ Carl protested, ‘If that is all I had to eat, I wouldn’t feel like giving thanks.’ Hans replied, ‘God has given me everything I need, and I am thankful for it. ‘The old farmer added, ‘It is strange you should come by today because I had a dream last night. In my dream a voice told me, ‘The richest man in the valley will die tonight.’ I don’t know what it means, but I thought I ought to tell you.’ Carl snorted, ‘Dreams are nonsense,’ and galloped away, but he could not forget Hans’ words: ‘The richest man in the valley will die tonight.’ He was obviously the richest man in the valley, so he invited his doctor to his house that evening. Carl told the doctor what Hans had said. After a thorough examination, the doctor told the wealthy landowner, ‘Carl, you are as strong and healthy as a horse. There is no way you are going to die tonight. ‘Nevertheless, for assurance, the doctor stayed with Carl, and they played cards through the night. The doctor left the next morning and Carl apologized for becoming so upset over the old man’s dream. At about nine o’clock, a messenger arrived at Carl’s door. ‘What is it?’ Carl demanded. The messenger explained, ‘It’s about old Hans. He died last night in his sleep.’ “   Author Unknown A gift of Inspiration website

Jesus taught us in the Sermon on the Mount with what is referred to as the Beatitudes, how to have joy, not to just be happy.  Joy is more about being happy in unhappy circumstances.

“The word, ‘happiness,’ is derived from the Latin word, ‘hap’. Hap means hap-hazard. It refers to circumstances that are happy. . . Whereas the Biblical concept of joy comes from the Greek word, makarios. You can be joyful and unhappy at the same time. You can be joyful even in the midst of unhappy circumstances. Joy has to do with the Spirit of God living inside of you. It has to do with that smile of God living in your heart. Joy is the assurance that God is with you and in you in all circumstances. It is knowing that in all circumstances of life, good and bad, that God is in control and will take care of you. It is knowing that God has a plan, a purpose and a prayer for you, even when the circumstances are unhappy. The net result is that you can be joyful during unhappy circumstances.  Jesus took his newly called disciples, his inner core, and took them up onto a hillside to teach them about his core values, and Jesus began his teachings with that which was most dear to his heart: joy.” True Joy vs Temporary Happiness  By Edward Markquart (Sermons from Seattle)

*On a warm summer morning in September, 1620, a group of English Separatists as they were called boarded the ship that was to take them to America.  The residents of a small Dutch seaside town in Holland, never forgot what they witnessed that day, people kneeling on the deck pouring out their hearts in gratitude, commending themselves into God’s care for the journey ahead.  It was recorded that “it was a remarkable display of love seldom found on earth”.  This was to be the voyage of the Mayflower Pilgrims.   One definition of ‘pilgrim’ is very fitting to this story:  A pilgrim is a traveler, literally one who has come from afar, who is on a journey to a holy place.  The 180 ton ship left the small Dutch port of Delfshaven, Holland with 102 passengers.  It wasn’t what the Pilgrims had hoped for.  There were many who were not of their religious bent which made the journey that much harder.  The Mayflower was built in a way that it could be tossed around with the wind and the waves like a bobbing cork. 65 days later on November 9 they saw land. As the Mayflower arrived in America, it had blown off course.  Where they had landed one half of the shipwrecks on the Atlantic coast are said to occur in that area.  With the ship on the brink of disaster, Master Christopher Jones made the historic decision to sail northward around Cape Cod to settle in New England instead of further south where they had a land patent. The historic landing took place and they poured out their hearts in thanks to their God of providence for delivery from the treacheries of their journey.  They were truly Pilgrims. We do not know the exact date of the celebration of the First Thanksgiving, but it was probably late September or early October, 1621, soon after their corn, squash, beans, barley and peas had been harvested.  The 52 Pilgrims, one half of the original colony, declared that now they had gathered the fruit of their labors it was time to rejoice together after a more special manner.  It was also a time during which Plymouth Harbor played host to a tremendous number of migrating birds, particularly ducks and geese.  Four men were sent fowling.  Rather than it being an European affair, it quickly became a native celebration when Massasoit their Native savior and a hundred Pokanokets arrived with five freshly killed deer.  Besides deer, ducks and geese there were wild turkeys.  All of which were being turned on a spit over open fires with cast-iron pots filled with stew. The Pilgrims with their new friends gathered around tables and fires and thanked God for their survival in the Promised Land.*

Our nation began in true thanksgiving for the most basic blessings, as we came together with those we perceived in the beginning as enemies.   Wherever you are and whatever you have, be thankful. Turn what you have into “enough and more”.  Glorify God with a life of gratitude and inspire that in others through whatever means God has given you.   Every good life is centered in joy and gratitude.  Have a joyful thanksgiving!

The information contained in this website is for general information purposes only. The opinions expressed are simply opinions. In case of emergency, call 911. Please speak to a licensed therapist, social worker or advocate for direction and advice. The information is provided by Sweetwater Journey and whilst we endeavor to keep the information up-to-date and correct, we make no representations or warranties of any kind, express or implied, about the completeness, accuracy, reliability, suitability or availability with respect to the website or the information, products, services, or related graphics contained on the website for any purpose. Any reliance you place on such information is therefore strictly at your own risk. In no event will we be liable for any loss or damage including without limitation, indirect or consequential loss or damage, or any loss or damage whatsoever arising from loss of data or profits arising out of or in connection with the use of this website.
%d bloggers like this: